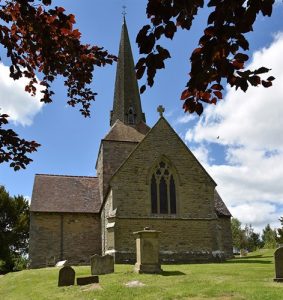 Neen Sollars (or Lower Neen) lies 12 miles from Ludlow, 12½ from Kidderminster, and three from Cleobury Mortimer. Now In the deanery and archdeaconry of Ludlow, diocese of Herford, it was formerly in the rural deanery of Burford, in the Hundred of Overs. It is bounded on the north by Cleobury Mortimer, on the south and east by Worcestershire, and on the west by the parish of Milson, which was a chapelry of Neen Sollars. In 1676 Neen Sollars had a population of 9S over the age of 16, all “Conformists”, while Milson had 62.

In Saxon times the manor was in the hundred of Condetret and was held by Siward the Saxon, who held large estates in Shropshire, some of them under the Bishop of Worcester. The Domesday record tells us that in 1086 “The same Osbern holds Nene, and Siward holds it of him. The same Siward held it, and was a free man. The manor was never hidaged, nor ever paid geld. There is arable land for five ox-teams. In demesne is one team, and ten serfs,and a mill paying a bushel of corn. In King Edward’s time the manor was worth 40s. per annum. Now it is worth 18s.” The fact that the manor had never been assessed for the Danegeld makes it probable that it had once been Church property, and had been by some means lost to the See of Worcester. Osbern fitz Richard, Lord of Richard’s Castle, the overlord in 1086, had a son Hugh, whose son Osbern fitz Hugh, about 1180, gave Neen to Baldwin le Poer.

Baldwin left three daughters, Eustacia, Petronella, and Elena, and Hugh de Say, nephew and heir of Osbern, gave the control of their lands to Roger de Solars, of Dorstone, in Herefordshire. Petronella le Poer married a De Freyne (de Fraxino, i.e. Ash) ; Elena and Eustacia married members of the De Solars family, and from them Neen Baldwin, as it was often called, became Neen Solars;.The overlordship passed to the Mortimers of Richard’s Castle, and the Mortimers of Wigmore held the manor under them, but over the co-parceners. Both the De Freyne and the De Solars families held land in Herefordshire and Sutton Frene, near Hereford, took its name from the former. In 1327. nineteen inhabitants were assessed for the King’s Subsidy, nearly all of whom were distinctly well-to-do. John Corbet, apparently the most wealthy, was one of the Corbets of Habberley, who held Merebrook and Tetneshull (Tetstill), near Neen. Tetstill had been a separate manor in 1086, held by Siward under the Church of Worcester. It then had land for 3½ teams, and a wood that could fatten 40 swine. Leland mentions that in his day (1530) there were ‘ bio shoppes’, i.e., iron forges, on the Milbrook that came down from Catherton Clee.

In those days of smelting by charcoal, this would imply a thickly wooded district. The Herald’s Visitation of 1623 gives the pedigree of Coningsby of Neen Solars, and states that John Coningsby married Mary, daughter of John Solars, and that their son Roger, steward to the Earl of Warwick, married the daughter and heiress of John Bagot of Morton Bagot, co.Warwick. The eldest son of Roger, according to the Heralds, married a Warwickshire heiress, while the second Sir William, married Beatrice, daughter of Ingelram de Frene, of Neen Solars. Sir William was knighted on the field of Crecy, and his son Thomas also took part in the French wars, being taken prisoner by Johan de Almayne, whose daughter Theophenia (Tiffany) he married.

No clue is given as to whether their son John, or his son and grandson lived at Neen, but his great-grandson, Humphrey, whose mother was heiress of John Whethill, is called of Neen Solars, and is said to have married Blanche, daughter of Sir Robert Corbet. The Coningsbys, of Hertfordshire, are said to be descended from Humphrey’s brother Thomas. The Coningsbys were of Neen for at least four generations longer, down to Humphrey the traveller and scholar, whose tomb is in Neen Solars Church. His grandmother came from Essex, and this seems to have given some of the junior branch an interest in the eastern counties, though other members lived at Leominster. Humphrey the traveller was born in or about 1567, and started in 1610 to Venice to begin the journey, from which he never returned. His monument has, with several other mottoes and verses, above his effigy in armour, the following long inscription, which is of considerable interest: “This statue and monument was made in commemoration of Humfrey Conyngesby Esq. the only sonne of John Conyngesby of Nene Solers Esq : and of Anne his wife the daughter of Thomas Barneby of Hull in the Parish of Bockleton and County of Worcester Esq : which Humfrey Conyngesby was late lorde of this Nene SoUers and patron of this Churchand was heire of the eldest lyne and family of Conyngesbys from whom the rest are derived, which before King Johns tyme were Barons of England and then resided at Conyngesby in Lincolnshire.

He was a perfect scoller by education and a greate travayler by his own affection he began his first travaill in April 1594 being 27 years ol age 2 monethes and for foury ears and upwards remayned in Fraunce, Germanie Italy and Sicilye and then returned home for a little while and tooke his jorney again into Bohemia, Polonia, and Hungary where for defence of the Cristian Faith he putt himself under the bannar of Rodulphe the second Emperour of the Romanes (as a voluntary gentillman) at the Seedge of Strigonium in Hungary against the Turkes, afterwards to satisfie his desier (wch was to see the most eminent places and persons) he went into Turkey, and to Natolia, to Troy in Asia by Sestos and Abydos, through the Hellespont and into the lies of Zant, Chios, Rhodes, Candy, Cyprus and divers other places in the Archipelago, he visited also sundry auncient and famous places of Greece, as Arcadia, Corinth, Thessalonika, Ephesus and Athens, went over the plaine of Thermopylae (by wch Xerxes passed into Greece)and to the top of Mount Athos, the highest hill in Greece, and so arrived at Constantinople in the raigne of Mahomet the Third Emperour of theTurks who to do him honor gave him a Turkysh gowne of cloth of gould and his mother the Sultana Ebrita gave him another rich gowne of cloth of silver and 250 chequins in gould, and after 13 monethes aboade there he returned to England, to the joy of his trends where staying awhile he went into Spaine and came back in safety, and againe the 4th tyme he tooke his jorney from London to Venice the 10th day of October 1610, and from that day was never after scene by any of his acquaintance on this side the seas or beyond nor any certainty knowne of his death, wher when or how, and from his first jorney to his 4th and last was 16 years and 6 monethes.

He lived a batchelar, leaving behind him one sister of the whole bloode named Katherin the wife of Edward Freeman of Emlode in the County of Worcester Esq. and one other sister by the mothers side named Joyce Jeffreys whom he made executrix of his last will and testament appointing her thereby to erect him a tombe with an inscription of his condition, life and death, which she hath heare performed though short of his perfections. Tempora mutantur. Anno Domini 1624.” The Heralds’ Visitation does not show the connection with the Coningsby family of Hampton, co. Hereford, which was a younger branch of that of Neen Solars. Sir Thomas, knigh.tcd by Queen Elizabeth in1591, and one of the Council of the Marches was descended from Humphrey Coningsby, famous as a lawyer in the time of Henry VII. The Coningby Hospital at Hereford was founded by Sir Thomas, “the father of the owner of Hampton, Fitz William Coningsby, who held the advowson of Neen Sollars in 1630.

He was Sheriff of Hereford in 1642, and suffered much as a Royalist. He was M.P. for Herefordshire in 1640, but was dismissed on technical grounds as holding a share of a soap monopoly, and his son Humphrey took his place in the House of Commons. One account of the family says that they came originally from Coningsby Castle in Lincolnshire, and were settled for several generations in Shropshire before, in the reign of Henry VIII., they bought Hampton Court, the house of the Lenthalls, near Hope under Dinmore. The same account gives the rhyme on Thomas Coningsby’s marriage to the daughter of John d’Almain. : – “Thomas de Conyngesby And his wife Tiffany Came out of Brittany With his man Maupas And her maid Maleface And their dog Hardigrace.” Fitz William Coningsby married Cecilia, elder daughter of Henry Neville, Lord Bergavenny.

During the Commonwealth her husband’s estates were sequestrated, while he was absent from England, and she and her children were on the verge of want. She applied for the grant of one fifth of the income from their estates in Herefordshire and Salop, but after much begging was only granted one fifth of that from Neen Solars,—a very small portion of them. Humphrey Coningsby’s half-sister Joyce (daughter of Anne Bameby by her second husband, Henry Freeman ofHam Castle, co. Worcester), was dowered with a comfortable income from his estates there. She had difficulties aIso with regard to her income, but the Civil War did not bring the financial ruin upon her that it did upon her cousin of Hampton. The editor of an article in Archacolofiia for 1856, on the account bookof Mistress Joyce Jeffreys, says that she or whoever furnished the details of the inscription seems to have a little mixed the chronology.

The only Siege of Strigonium (Gran in Lower Hungary) under Mahomet III. was in 1394, the next one and that in 1605 being under his successor Achmet. Mistress Jeffreys, who never married, spent some part of her life at Hampton, and in her notebook, she speaks gratefully of Sir Thomas, and often mentions her kinsman Fitz William Coningsby. She lived through stirring times, but died at Ham Castle, her nephew’s house, in1650, and was buried at Clifton-on-Teme, co. Worcester. Her agent, and probably tenant, at Neen Solars was Humphrey Hardman. She had a favourite god-daughter, Elizabeth Acton (whom she portioned with £800 on her marriage in 1643 to Francis Geers of Gamons), who not improbably was of a Shropshire family, and may have been one of the five daughters of Richard Acton of Dunvall, near Astley Abbotts.

There are two cottages (formerly one house) near the Church, which are traditionally said to have been part of the old Manor House. Or it may have stood just opposite, where now is Neen Court. The living was in the gift of the Mortimers, and later of the Duke of York, and then of the King. In 1630, Fitz William Coningsby, of Hampton, co. Hereford, was patron, but Thomas Bury, who seems to have lived at Burford, presented in 1673, Silvester Shaw and his wife in 1704, and Richard Knight in1753. Sometime between 1795 and 1813 the advowson passed to Worcester College, Oxford, the present patrons. [Original source: Auden, H. M. (1915) Neen Sollars in Fletcher, W.G.D. (ed) (1915) Shropshire Parish Registers, Diocese of Hereford vol. XVI, Shropshire Parish Register Society]